Accueil > News > Uncategorized > End of the course for Margaux and Frédéric

End of the course for Margaux and Frédéric 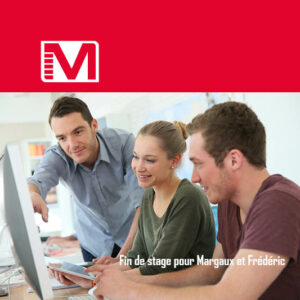 Maviflex welcomed two trainees for one month: Margaux and Frédéric.

Long before his arrival at Maviflex, Nicolas took his role as tutor to heart. According to him, it is important to accompany young people in the business world during their studies. Obtaining a good diploma allows to gain knowledge, but an internship brings skills and experience within a company. The internship gives young people a real progression, they can put their theoretical knowledge into practice, it is a real benefit of the internship. Moreover, Nicolas explains that it also allows them to see what the professional world looks like in which Margaux will have to evolve.

According to Nicolas, the tutor’s role is to accompany his trainee and to provide knowledge of his core business. In the last two years, telecommuting has increased exponentially. However, for Nicolas, teleworking is a mistake for young trainees. They are not supervised by their tutors and are not immersed in the working world. This is why Margaux carried out her tasks in collaboration with her tutor, but also with the other members of the Export team.

Nicolas particularly appreciates his role as a tutor and would like to continue this in the years to come. Integrating young people into his team allows him to bring something new, an outside view, but also a new work atmosphere.

Margaux’s internship: a consolidation of her professional choice

Margaux is a 21 year old girl in her second year of a BTS in International Trade. Since her childhood, Margaux has always enjoyed languages, and since elementary school she has learned Italian. As she grew older, Margaux discovered a real interest in English, so she decided to learn on her own by listening to music, watching movies, etc. After graduating from a technological baccalaureate in catering, Margaux went to London for 5 months for total immersion. During this period, she was able to work in a restaurant and develop her knowledge of English.

Margaux had already done a first internship in telecommuting for a Canadian company, she was in charge of customer prospecting, completely autonomously and 100% in English. This internship helped her to be more confident about her language skills. Moreover, her BTS course gave Margaux knowledge in business that she was able to apply during her first internship.

Now, in order to validate her diploma, Margaux was in internship at Maviflex for 4 weeks. During her internship, she was able to discover the order process, from the writing of the estimate to the transport stage. Margaux expresses her satisfaction, this internship allowed her to consolidate her choice to work in an export department. This internship allowed Margaux to get interested in the BtoB sector as well as the industrial companies of which Maviflex is part.

Opportunistic by nature, Zied has always welcomed interns in his department. The most important thing for Zied is that his apprentice has really interesting tasks that allow him to grow. Zied has the same opinion as Nicolas about teleworking. It is not beneficial for his trainee to offer him teleworking when the contract is short. In IT, there may be tasks where employees can work remotely, for example development is a meticulous task that requires concentration. But when Zied welcomes an intern, it is to accompany him or her in the company. That’s why Frédéric is on site throughout his internship.

According to Zied, the support Frédéric receives from the company throughout his contract allows him to develop his skills. In addition, his interpersonal skills and interactions with his colleagues are also soft-skills that are enriched. Supporting Frédéric and all young people looking for an internship gives them a chance to enter the corporate world. It is a professional experience, which can even be the first one, and it allows young people to discover what interests them. The application during the internship is a real opportunity and Zied wants to accompany as many young people as possible.

In the future, Zied will continue to welcome young people, according to him it is a real exchange. Everyone wins, both the trainee and the company. Zied often keeps in touch with his trainees; he appreciates the fact that he can see them evolve professionally and see all their achievements.

Frédéric is 19 years old and holds a Bac STMG. He is in his 2nd year of a BTS in Computer Services for Organizations (SIO). Frédéric is at Maviflex for a period of 6 weeks in the IT department in order to validate his BTS. Since his childhood, Frédéric has been particularly fond of new technologies, including video games. His father is a computer scientist, so Frédéric was able to see the computer profession through his father. He also has a particular attraction for legos where he can improve his concentration skills and his patience. The Bac STMG allowed Frédéric to develop an interest in management. What he likes most about this discipline is the interaction with colleagues, managing projects, etc.

Since mid-January, Frédéric has been carrying out various tasks that bring him a lot of new knowledge. His main missions are: the initiation of computer devices (computer, tablet) as well as the accompaniment of the IT department in various projects. Frédéric explains that he feels at ease with his colleagues, his tutor and the company in general. This internship is not his first professional experience, during his first year of BTS, Frédéric did an internship in a Regional Council. During this internship, he was in charge of the development of the cartography on the website of the regional council.

Maviflex wishes you a very good continuation and a good success in your projects!

These allow us and our partners to access information stored in your equipment in order to improve your experience on the site, to carry out statistical analyzes and to offer you personalized content/advertising.

Legally, we can store cookies on your device if they are absolutely necessary for the operation of this site. For all other types of cookies, we need your permission. You can modify or revoke your consent at any time by clicking on “Manage cookies”
For more information on cookies, please see our cookie-policy. If you want to know more on how we process your personal data, we invite you to consult our data protection policy.